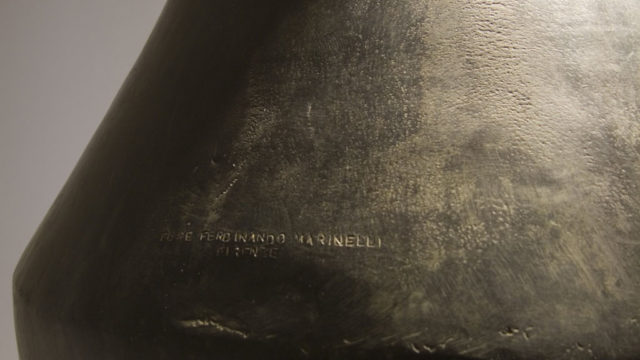 For an exhibition at the Palazzo delle Papesse (Siena), a large bronze object in the shape of a bell’s tongue was installed. Nearly 3 metres high and able to be swung, the tongue makes reference to the enormous cathedral bells that are prominent throughout the city. In this piece, the walls of the museum are positioned to replace a bell’s skirt, allowing for the possibility of the museum to be rung. An opera singer (Kathleen Burger) performed a song by 19th century singing sensation Jenny Lind, while under hypnosis. This was staged at Castle Clinton in Battery Park (New York), the site of Lind’s first concert in the U.S.

The performance references 2 prominent figures from the late 19th century: The Swedish Nightingale, Jenny Lind, and the fictional character Svengali; an invention of Victorian author George Du Maurier in his hugely popular novel Trilby (1894). The show responds to Jenny Lind’s inaugural tour of the U.S. in 1850, organized by PT Barnum, which created such a frenzy that enthusiastic crowds became known as a ‘Jenny Lind crush.’ At the same time, Barnum invented Lind’s public persona as a model of modest feminine virtue (contrary to the reputation of female performers in general). Lind must have been complicit, to some degree, in allowing the media to take over her public persona. As is the case in the process of undergoing hypnosis.

The Pervasive Echo was facilitated by the Museum for African Art in New York for Performa 09. For the purposes of Sacks’ MFA practical exhibition, a staged studio was set up in what was then a communal artist’s space in Commercial Street, Cape Town. The installation was contrived to appear as if 2 years’ worth of work had been made there. Later in the year, another Open Studio installation was set up in a gallery space (Cortex Athletico in Bourdeaux). A construction within the gallery was fabricated to look like a working artist’s studio and filled with different kinds of texts relating to exhibitions, describing real and imagined artworks. On 21 March 2004, the public holiday Human Right’s Day in South Africa, a plane was hired to write the words ‘Don’t Panic’ in the sky over the Cape Town city bowl. The Don’t blew away long before the Panic. Video footage of the event has been made into a two channel DVD.

Seen here are photographic stills of the public intervention. Several taxidermy pigeons were combined to make a series of large birds that were placed in various spots in Cape Town.