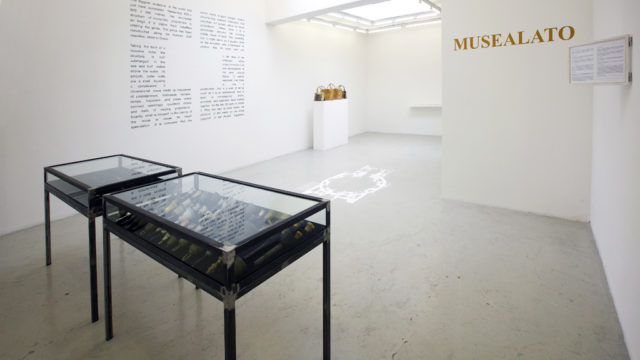 This exhibition, at Extraspazio (2010), was made up of collected and invented objects. The focus was on things with double-sided and portable qualities, which could engage with the surrounding city of Rome.

This counterpart to Ringing the Museum is a collection of hand-held bells whose tongues have been removed and placed in a separate vitrine. These lightboxes look at architectural ornament on buildings from Medieval times (gargoyles, grotesques, etc), which continue to be a feature in certain kinds of urban landscapes. Each of the 2 boxes has the head of an animal from a Medieval bestiary on one side (from the Sancti Epiphani Physiologum, 1587) and zoological drawings of jellyfish by Ernst Haeckel on the other (from Art Forms in Nature, 1904) to create a new composite creature. Each box that makes up this work is a form of time capsule with a set of instructions as to how it must be used. This box may only be opened within the year stipulated on its outside by its owner. The owner must then carry out the following instructions:

1. The owner of the box must transcribe the first headline of the day in the first newspaper

2. The postcards must then be addressed and sent to the following people with whatever

means of postage is used at the time of the box’s opening:

I. The head of the nearest school in the vicinity of where the owner of the box lives.

II. The favourite artwork of the owner of the box.

III. The owner of the box

This box and the contents of it make up part of the artwork ‘At The Moment (Rome)’, made by the artist Ruth Sacks in 2010.
The artwork consists of a series of 5 x wooden boxes of the same size, labelled with the following years: 2014, 2034, 2059, 2259 and 2509. 2 versions of the series exists, one made in Rome and one in Brussels. Inside each box are 3 x postcards that depict the city in which the work was made (Rome or Brussels).
The same 3 different types of postcard are in each box. The postcards were all bought by the artist in 2010.

The exhibition was meant to include an installation of coins from Rome’s Trevi Fountain. The short diary below explains what happened when the gallery tried to obtain them. The gallery was instructed to obtain an amount of coins that had been thrown into the Trevi fountain by visitors making a wish to return to Rome. Our directions were to obtain some of these coins to be installed in the gallery space for the exhibition ‘Double-sided Accumulated’ in January 2010, as an artwork by Ruth Sacks.

We had found out that the coins from the fountain are usually given to Caritas, an international Catholic relief agency. We made a phone call to Caritas International. They told us to call Caritas Diocesana, the Roman branch of the charity organization. The secretary at Caritas Diocesana said she was not sure if she was authorized to sell coins from the fountain. She suggested that we e-mail her director and we did so. He never responded. We called the central office of the Municipality of Rome and talked to a secretary there. She said that the Superintendent of Fountains and Monuments might be the person responsible for the coins. She gave us his number.

Officers of the Superintendent of Fountains and Monuments informed us that the 12th Department of the Municipality of Rome oversees the maintenance of the Trevi fountain. They also told us that ACEA, the electricity and water utility for Rome, is responsible for collecting coins from the fountain. We called the 12th Department of the Municipality of Rome. They also advised us to speak to ACEA. We contacted ACEA. An unnamed consultant (the telephone consultants are not allowed to reveal their names to members of the public) made enquiries into whom to talk to about obtaining the coins. It became evident that the right person to consult was not available that day. We were instructed to try calling again the following day.

It occurred to us that the Spokesman of the Arts of the Municipality of Rome might be able to help. We contacted an assistant of the Spokesman. He told us to send an email explaining the project. We emailed the Spokesman. We did not receive an answer. We called ACEA again and talked to another unnamed person. This time, we asked for the number of the office responsible for collecting the coins from the Trevi Fountain. He informed us that he was not allowed to give out any names or numbers and, even if he could, the people concerned were not allowed to talk to private citizens. He told us to wait while he asked for advice from a colleague. After a longish wait, we were told that the company is not in charge of the coins.

We called the Spokesman of the Arts of the Municipality of Rome again. A secretary informed us that our request was not in their jurisdiction and that we should contact AMA, the Municipal Street Clearing Department who collects the coins. In addition, she suggested that the Exhibitions Office might be able to help. She gave us their contact number. We called the correct person at the Exhibitions Office. She said that she had just been reading our e-mail to the Spokesman. Apparently, a Norwegian artist had very recently asked to obtain some water from the Trevi Fountain. She told us that she would call back as soon as she had some news regarding the coins.

We called our contact at the Exhibitions Office again. She said she would try to persuade the Superintendent to help us and that we would talk again on Tuesday 15 December 2009).

There was no news from our contact at the Exhibitions Office. We tried to call her in the morning and afternoon, but were unable to get any response.

Our contact at the Exhibitions Office called, saying that she had spoken to the Superintendent and we could proceed with the project. She said that the superintendent would call us and, at that time, we would have to state exactly how many coins we needed. We could then make a donation towards the maintenance of the fountain to the equivalent sum of the value of the coins we received. She warned us that it would take a lot of time.
We pointed out that the exhibition’s opening date was 14 January 2010. Our contact said that it would be impossible to organize the necessary meeting with the superintendent, the Municipality, AMA, Caritas and ourselves in such a short time. She added that, during the Christmas holidays and especially after New year’s Eve, AMA have emergency cleaners for all monuments and fountains and also that the offices of the Municipality and that of the Superintendent would be closed. She suggested we change the day of the opening to February.

Unfortunately, this was impossible.